HOW IT ALL STARTED

Formation of the Society

In Easter 1975, a clawhammer banjo player called Phil Moore attended a 'history of bluegrass' workshop led by Rod & Judy Jones at the National Folk Festival in Sydney. He figured that even if only 10% of the 300 or so people who attended the workshop were interested, there might be enough interest to start a banjo club. He stopped by to talk about it with Rod & Judy, who thought it was a great idea but suggested it could have a broader focus and extend to bluegrass and old-time music in general.

Consequently, in June 1975, around 30 people met in a room in the University of Sydney to talk about setting up a group for people who were interested acoustic bluegrass, old-time and other traditional country music.

Origins of the name

After some discussion, the name was chosen. At that time, 'bluegrass' was a music type that was only about 30 years old, but people who knew of it had a fairly good idea of what it was. On the other hand, in Australia, old time music was generally understood to refer to the old time dance bands that older people probably remember. So, 'traditional country music' was chosen to include the whole range of other acoustic string music originating primarily in the Appalachian mountains, such as old-time stringband music, pre-bluegrass acoustic country music (eg. Carter Family, Blue Skye Boys, etc) and traditional Appalachian folk music.

As a result, the Bluegrass & Traditional Country Music Society was formed. The term 'of Australia' was added a little later to make it clear that it was located in Australia - there was no internet back then, remember.

Getting together to enjoy the music

From July, monthly open mic concerts started in the Fine Arts Workshop at the University of Sydney. People of all levels of ability were encouraged to play on stage and the more experienced musicians would help by backing them up.

There was often a short southern style square dance at the start to live old-time stringband music. Occasionally there were workshops either on the night or at other times. People like Paul and Colleen Trenwith and Colin Watson were regulars.

A monthly newsletter - The Cumberland County Rag followed and several concerts were organised with local, interstate and, later, overseas guests. We even designed and screen-printed our own posters for the concerts.

In 1985, Nick & Janet Dear started up an affiliated independent 'branch' of the BTCMSA in Victoria. They started up another monthly event, Pickin' At The Piggery, which ran in Melbourne continuously until 2011 when it morphed into The Blackwood Academy.

In 1987, the Dear and Jones families began discussing the possibility of holding an annual convention that was devoted to acoustic bluegrass, old-time and related traditional country music. Philomena Carroll and Laurie Grundy each let us know about a possible venue, Bon Accord, at Harrietville in Victoria and the Harrietville Bluegrass and Old Timey Music Convention was conceived. With the help of other volunteers, including Peter Sweatman, Peter Hisco and Ken McMaster, the first Convention was held on 19-21 October, 1989. Seeding funds came from Pickin At The Piggery, raffles, etc. Back then, the only other regular bluegrass or old-time music convention that we knew of in Australia was the Yarra Junction Old Time Fiddlers Convention.

The Harrietville National Bluegrass & Traditional Country Music Convention™ was held for 24 years in the town of Harrietville in Victoria (with a couple of name changes along the way). From the outset, there was a vision (long before that was a trendy or fashionable word) and a purpose that never wavered. That vision was to encourage people to play the music. The final Convention was held in 2012.

The organising committee for the Convention was eventually formalised as a separate not-for-profit group, The Harrietville Bluegrass & Traditional Country Music Convention Inc. for legal and practical reasons. It was incorporated in Victoria where the Convention was held. The Convention was supported by the BTCMSA, sponsored and supported by Pickin' At The Piggery and the Sydney Bluegrass & Old-Time Music Get-together and underwritten by the Dear & Jones Families. From 2009, the Alpine Shire Council also provided small grants of between $1,000 and $1,500 each year. (For more information about the Convention, go to the Convention Website or the Facebook Page.

More than forty years and three venues later, we are still getting together once a month in Sydney (on the first Saturday, March-December) for a workshop and open mic acoustic concert. Check out the Sydney Bluegrass & Old-Time Music get-together page on Facebook. The Blackwood Academy still organises occasional events in Victoria.

Over time, newsletter has gradually become an infrequent publication. The content is oriented to articles, reports on conventions and festivals, playing tips, etc. The function of keeping members informed more frequently takes place via BTCMSA MEMBERS NEWS AND UPDATES sent directly to their email in-boxes.

Throughout its history, the BTCMSA has remained an informal interest group, with the emphasis being on spending time playing and learning and sharing the music. All of the activities of the BTCMSA are carried out on a volunteer basis by the founders, an informal coordinating group and any other interested people who want to give their time and energy for the music that they love. 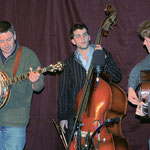 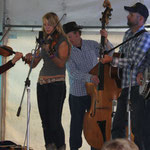 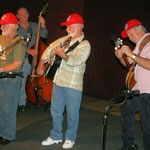 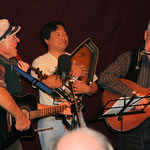 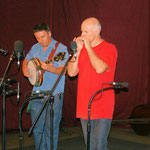 If you are unwell, particularly with COVID, please follow health advice and stay home this time. Thanks.

Rules of the Association
Close